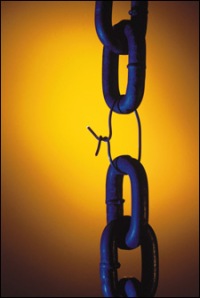 Whether we’re looking for someone to blame, or someone to recognize and promote, the fact is, we should be looking for the person accountable rather than responsible.  But is there a difference?  You bet there is.

Think of the picture above.  The link in this picture, represented by a twist-tie, has the “responsibility” to connect two ends of the chain.  However, this same link will not be held accountable when the chain breaks given that it’s size, strength, and structure are clearly not the same as the other links.  In the end, accountability lies with the person who attempted to take a short-cut and use a weaker link to hold the entire chain together.

Saying you’re responsible simply means you’ll get something done or taken care of.  It does not in any way provide a stated commitment to the quality of your action or work.  However, to say you are accountable means you’re willing to be held liable for any and all outcomes of the work or action you’ve taken.

It’s no wonder that most people are willing to say they are “responsible” individuals, but few are willing to be held accountable.  This is evident in everyday places from families, to companies, to government.  Often times you hear people say, “Well, I’m not the one responsible”.  What they are saying is, they were not the person who was charged with doing the thing that’s being criticized.  Skirting responsibility is actually quite easy and we see these behaviors daily in news reports.  If someone is truly accountable, and they accept total accountability, they in fact are standing up to say “whatever the outcome is you can blame me or congratulate me…I own it either way.”

Strong leaders take accountability for the results of the team they lead…good or bad.  They don’t hide behind someone else’s lapse of responsibility, but instead stand tall and take the high road.  Being accountable energizes and emboldens them to the work at hand.  Those are the leaders people line up to follow.  Those are the difference makers.

One thought on “Responsible Leaders Vs. Accountable Leaders. Which would you prefer to follow?”